A wild boar wandered into the Hong Kong International Airport’s apron on Tuesday. Airport Security Unit officers pushed the wild boar to the ground with shields, possibly injuring the beast as it was shown bleeding from the nose and mouth. 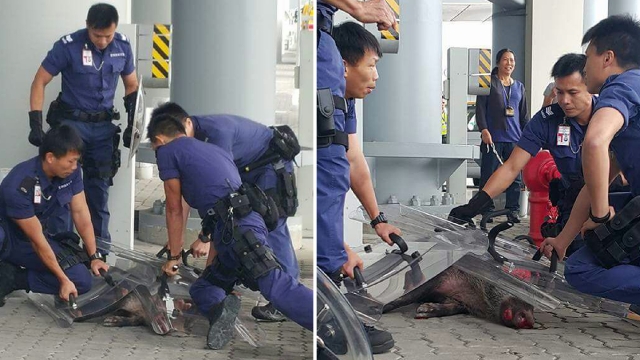 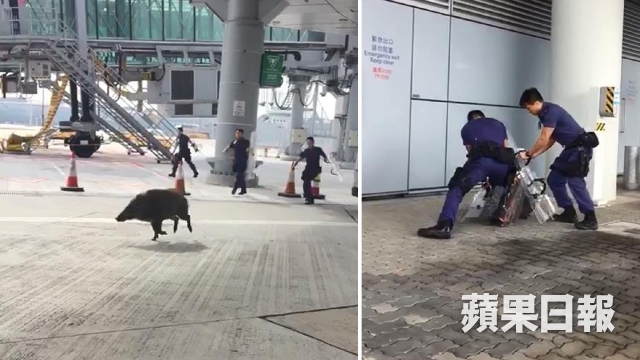 Wong added that it is possible that the boar swam from Lantau Island to the airport.

A drama unfolded in Shek O on Thursday as authorities captured a huge snake discovered in the village. The snake appears to be a python, which are not venomous but can bite and grow up to nine metres in length. Footage of the incident, shot by resident Janva Tam, was shared widely on social media.

Hong Kong has recorded at least 6,784 insect species – most of which are fairly benevolent. However, some are less friendly. HongWrong has collected a list of the city’s most dreaded creepy crawlies.

Also known as giant wood spiders or banana spiders, they feature a leg span of up to 20cm and often prey on snakes or small birds. They are one of the biggest spiders in the world and, if you fancy a visit to the lovely Lantau Silvermine waterfalls, expect to be absolutely surrounded by gaggles of these nightmarish arachnids. Hong Kong’s “Jumanji Island,” Tung Ping Chau, is also teeming with the damned things, ready and poised to devour your first-born child. HKU students Arshiya Khullar, Agnes Lu, Susie Wu, Kenton Chan have produced a 15-minute short film about a Hong Kong pet cemetery, following two local families as they say goodbye to their much-loved animals. The mini-documentary follows a young boy as he bids farewell to his cat Lulu and a woman who lets go of her sick dog.

It was rhesus monkey pandemonium at a primary school basketball court on Monday morning after a 28-year-old man stumbled upon dozens of macaques “occupying” the court. Mr Lee and his family were making their way to Tsz Wan Court in Tsz Wan Shan at around 11am. Lee said he saw saw around 50 monkeys “occupying” the basketball court next to The Church of Christ in China Kei Tsz Primary School. Teachers forbade students from leaving the classrooms to ensure that they would not get hurt. A porcupine was spotted wandering around the Citibank Tower in Central at around 3am on Monday morning. An eyewitness posted a video to Facebook showing the porcupine seeking shelter under a nearby structure.

Most netizens were concerned with the wellbeing of the spikey rodent and were unsure of the animal’s fate should the authorities be informed. One netizen pointed out that, as porcupines are protected under the Wild Animals Protection Ordinance, they will first be given a checkup by a vet with Kadoorie Farm, and then released back into the wild.